Crossing on a Sunny Day 1

Crossing on a Sunny Day 2

Crossing on a Sunny Day 3

This year (2018) I felt like a challenge and that’s how the idea for 100 watercolor paintings of city scenes came about. I often work in a series. Two of my favorites are one of rickshaws and another of a beautiful place called Sasebo in Japan where there are over 200 islands. But I’ve never done more than about 20 to 30 finished paintings in any one series. Doing 50 paintings would have been more sensible but that number just doesn’t sound as exciting as 100 - so it had to be 100.

I have a great love of watercolor paintings of city scenes. And I feel fairly confident that I can paint 100 pictures of the city as I have been painting cityscapes for over 10 years now and it has become a very familiar subject for me. Below is one of my early efforts from about 10 years ago and very unlike my paintings today. (Coming one day!)

Nowadays, I am interested in the effect of light and shadow. In Japan the light is often intense. And like alchemy, this intense light transforms the ordinary into the extraordinary. For instance, the painting below shows just a few ordinary buildings, but in the right light they become extraordinarily beautiful.

The light is so intense in Japan that I have to wear sunglasses - even in winter on occasion. The intensity of the light creates dramatic, you could even say harsh, contrasts of light and shadow which I love to paint. They can, as in the painting below, almost be black and white images.

Through shadows the ordinary becomes more distorted into an abstract pattern of shapes and lines. Such as in the picture below where I painted the shadow of an elevated railway as the foreground but also as another frame within the picture itself.

In the shadows, cars and people become partially dissolved, almost spectral. I especially like to have the cars become just lights and a windscreen. In the painting below, the familiar every day evening rush hour becomes I hope more of a ghostly and mysterious moment - and with that beautiful sky in the background somewhat romantic.

Recently I was called Mr Shadows. This title surprised me because I always see myself as a painter of light. And then I realized you can’t have one without the other and it is getting the shadows right that creates the brilliance of the light. Sometimes I wonder though if I don’t go too dark - especially for a medium like watercolor - as in the painting below. I do tend to be a little heavy handed I think.

But now and again I do manage to create a more delicate piece - such as the one below. (coming one day!)

A lot of my paintings are of evening scenes. As the sun goes down, I find it spell binding to see the lengthening shadows of objects. Everything becomes beautifully exaggerated and distorted and blends together. It’s a change from the real to something more surreal - in other words, it’s a magical period.

I often paint looking into the sun - with my sunglasses on of course. When the sun descends so that it is just above buildings then these shapes begin to glow with warmth - they look like molten gold or a red hot poker in the fire.

The sun also seems to slice into buildings. In the painting below I had the sun cutting through the building.

As well as looking up, I’m also looking at the ground a lot. I have a fascination for surfaces. Roads are so beautiful with their rough appearance, cracks, skid marks and white lines. And the scattering of light upon the surface of the road attracts my eye. Often it is just a small rough patch of dazzling light in the middle of the road that nobody really notices but in a painting it can become the main piece. I spent some time using the dry brush technique when painting seas and I used the same technique to capture these dazzling patches. Later I thought of having this dazzling patch of light on a crossroads. It then becomes a mix of rough texture, dazzling light and sharp white man made lines - beautiful. It’s also an ideal spot to put a cyclist or a pedestrian.

Another wonderful find related to water was a waterjet feature near my local train station. This circular feature shoots out jets of water, produces mist and at night has lights. Watching children, including my own daughter, running through the mist and laughing will always be a source of enchantment and happy memories for me. It took a while though before I had the courage to paint this scene. I knew it could make for a fantastic painting, but I wasn’t sure I could pull it off.

So you know that even though I’m painting city scenes what I’m really painting is the light. And this series called really be entitled 100 paintings of light. But it is not simply depicting the light that I hope for. What I really hope for in my paintings is a feeling of atmosphere, otherwise it’s just paint on paper. And whenever anybody tells me they can feel something then I feel a sense of success - although it doesn’t come as often as I would like.

If I were to give tips to inspire other artists then it would be firstly and mostly importantly to get out more. I really value studio work but if you are just a stay at home artist then I think you are missing out on a great source of inspiration. It is so vital, in my opinion, to get out and to be looking and training your eye to find visually arresting scenes. And to paint outdoors is even better - and it’s so fun. My bicycle is like a mobile studio. I roam about the city looking for scenes to paint with my easel and equipment in the basket of my bicycle.

You also have to be an opportunist always on the lookout for an inspiring scene. One day, while taking my daughter to nursery school by bicycle, I saw the beautiful scene below of a temple gate. It was early morning which is often an inspiring time of the day. As soon as I returned home I grabbed my materials, jumped on my bike and went to paint this scene.

Another example of being on the lookout for inspiring things to paint is the watercolor sketch below. This piece came from seeing a figure in the rain holding a white umbrella and carrying a plastic bag. At the time I was unable to sketch this figure as I was in the car but I couldn’t forget how white and bright the umbrella and bag looked and what an exciting image it was. When I got home I had a go at trying to capture that image. I’ve not used it in a painting yet - but one day.

You also have to be patient and hopeful that inspiration will come. The painting below is of a castle wall which is in shadow. For a long time I disliked the short, squat concrete wall next to the moat of the castle wall itself. And I painted many pictures of this concrete wall that all failed. Then one day I was looking at it from an oblique angle and could see a beautiful pattern of light and shadow that led the viewer into the picture in an enticing way - it was a eureka moment. It also led to a miniseries of 5 paintings of this wall.

Inspiration also comes from spontaneous doodles. It’s essential to be open to ideas from your own mind and to act upon them immediately so that your action happens under the influence of the idea and within the freshness of it - it’s hard to describe but it’s a very living thing and it has a very short life. These ideas just seem to pop out of their own accord. I’ve become sensitive and respectful of them and to quickly pick up my brush and try to real-ize them on the paper while they are appearing in the mind. One idea was to try and capture the warm and cool colors of the sky in the windows of a building which led to the painting below.

And finally inspiration can come by accident - which is my favorite source of inspiration. Sometimes for economical reasons I paint over old paintings for practice and by chance it can lead to unexpected creations where the under-painting and the new one dramatically work together. One example was a road painting over a sea scene. When I did the new painting however I had turned the paper so that the waves of the sea were at a 90 degrees angle to the city scene that I was painting and this led to the idea of a vertical sky. Below is an experimental attempt at having a vertical sky. It’s not natural and I know someone on social media will give me a hard time about it, but it just looks great - perhaps because it emphasizes the vertical-ness of the city blocks.

I’m not even sure myself if I can finish 100 paintings of city scenes. Last year I intended to do a really big series on rickshaws but after about 15 finished paintings I got distracted by other subjects.

It’s always nice to have some support and feedback so if you wish to follow me (or just wish to see if I actually finish) then please sign up on my website. You’ll get the chance to the chance to give me some feedback.

And you might have some suggestions with my final problem. I hope to do an exhibition of this series but how am I going to frame them all? It’s always these little practical things that come between a dream and its realization.

I hope from reading this you have realized how painting in a series can greatly improve your own work and lead to more satisfying and enjoyable results. Please also remember the importance of getting out there, always looking for scenes to paint, doodling and happy accidents.

Buy a Giclee print of one of these paintings on Canson Aquarelle Rag (watercolor paper), 8 x 10" (20.3 x 25.4 cms), $60 (includes shipping). Full refund if damaged during delivery. Please include the title of the painting. Please expect about 2 weeks for delivery. 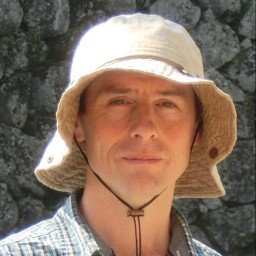